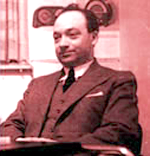 Michael Isaac Lipman was born in Leeds in 1902. The only boy of five children, Lipman’s parents were Russian Jewish emigrés who had settled in England in the Spring of 1892. From his earliest memories, Lipman found himself engulfed in the anarchist-socialist politics of his atheist parents whose house was always full of visiting revolutionaries and conscientious objectors from across England and the rest of the world. The most famous of these was Emma Goldman. After the war, Lipman attended Bradford Technical College before going on to Leeds University where he trained as an engineer. In 1924, Lipman started an electrical contracting business with a friend, which for a year or so was a huge success as they took advantage of the radio boom to assemble and supply wireless radio sets and parts for businesses and homes across Yorkshire. In 1928, Lipman sold his share of the partnership and moved to London where he began a successful industrial career developing the radio industry across Europe, mainly with the company Ekco.

Just prior to the outbreak of war in 1939, Ekco and specifically Lipman were commandeered by the RAF to find factory premises capable of producing radio aircraft-detection systems that would be installed in RAF planes to detect bombers, surface ships and submarines at night and in bad visibility. The activities of Lipman and the radar innovators at Cowbridge House became the subject of the book War Factory by Celia Fremlin of the social anthropology group Mass-Observation. The factory made one of the most important contributions to the defeat of Hitler and led to Lipman being awarded the MBE in 1944. After the war, Lipman joined forces with an Austrian businessman as part of an export business, developing trade links with countries across the Eastern bloc, particularly Yugoslavia and the Soviet Union. It was a career that entailed spending long and frequent periods abroad and so, as the sixties began, Lipman and his wife, Gertrude Emily Lipman, decided to slow down, moving out of London to a hundred-acre farm in Kent. Despite no agricultural farming knowledge or background, he immediately applied his brilliant technical mind to farming and increased the productivity of the land year on year. In his final years Lipman turned to reflect on his life, producing the remarkable Memoirs of a Socialist Businessman.

Lipman passionately believed in the ability of people to democratically control and organise society in a just, egalitarian and efficient way. To him, electoral democracy was was only a minimum prerequisite of democracy where the class system determined real power. He was above all a pragmatist, someone who believed in gradual human improvement through enlightened government and employer attitudes, the application of modern science and industrial techniques. He had little time for the divided dogmas and theological fundamentalisms of the socialist and Marxist left, seeing Marx’s true legacy as his philosophical and analytical approach to interpreting the world, and not the answer to changing it. He was especially critical of those Marxists who fetishised the working class. Lipman’s commitment to socialist education and research was probably born through his experience of the Socialist Sunday School movement in the early 1900s. His dismay at the breakdown in this tradition was clearly an inspiration behind his creation of the Lipman Educational Trust in 1974 with a foundation sum of £50,000. He wanted to encourage socialist and progressive educational research, wiritng and debate.