My aunt, Gertrude Emily Lipman, was born in 1905, the second eldest of nine children of Harry and Ethel Sykes (nee Howard). Her father worked as a faceworker in the South Yorkshire coalfields at Elsecar Colliery near Hoyland. Harry and Ethel started their married life together in a small house, in a row of three such houses, in the tiny rural hamlet of Blacker Hill, near Barnsley in South Yorkshire. It was a politically aware household, as was often the case in mining communities, and would lead in time to all their children, especially the boys, espousing the cause of left wing socialism. Harry Sykes on one occasion met James Keir Hardie, a founder and the first leader of the Independent Labour Party. 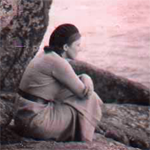 Gertrude Emily, who would come to be known as ‘Mick’ to her family and wider circle of friends and acquaintances, reached her early teens during the First World War. That terrible conflict made its mark on her young and impressionable mind and left her a convinced atheist, unable to accept the idea of a God who would allow her favourite uncle, Louis Howard, to be killed in the trenches of northern France. Her formal education, like so many of her generation and gender, was limited in formal academic terms to the local village school, but she became an avid reader of all manner of books, both fiction and non-fiction, which more than made up for this earlier limitation and would sustain her thirst for knowledge thought the rest of her life.

Mick was later apprenticed to a milliner in Leeds where she not only learned a craft to earn a living but also added a practical skill to her burgeoning sense of style and elegance which made her stand out amongst her peers. She could transform a slim wardrobe with a strategically placed scarf, or hats worn always at an interesting angle to enhance her finely chiselled features, and create a captivating image, which would lead her future husband to refer to her as a “strikingly original Yorkshire girl”. I have always thought of her as reminiscent of Greta Garbo although without that actress's exaggerated recluseness.

But it was not only her beauty and style that would lead to this epithet. Her sharply enquiring mind and appetite for reading combined with her increasingly strongly held social and political views forged in the cauldron of a new awareness following the First World War. They also combined powerfully with those of her future husband and resulted in a perfect match in which she became such an indispensable support for him and his growing business career both at home and abroad. The pair eventually met through the auspices of Mrs King, the head of the Biology Department at Leeds University and Warden of the ladies’ hall of residence at Weetwood, where Mick had spent a summer sewing and repairing bed linen with her sister Edna.

Blessed with a spirit of adventure, she moved to London in 1927 to try her luck in the wider world, which became the catalyst for Mike Lipman to wind up his business partnership in the north and follow her to London, where they got married the following year. She also had an strongly matriarchal sense of family loyalty, which would lead, in the early 1930’s, to an early migration southwards of her brothers and sisters, and eventually parents, to where the Lipman home in Essex, and a variety of jobs for her brothers, including in the Ekco radio factory in Southend-on-Sea, where Mike had started work as Production Engineer in 1930. To all around them, Mick and Mike — eventually known more simply as the ‘Micks’ — were obviously the best of friends and developed that quality so typical of successful marriages of enhancing each other’s strengths, and keeping a sense of the one always with the other. Her matriarchal and organisational abilities were given fresh expression when, with the expansion of the workforce at the Ekco Radar factory in Malmesbury during the Second World War, she turned her own home, Rodbourne House, into a girls hostel to provide some of the necessary additional accommodation, later voted as the best of its type in the country by an all-party group of female Members of Parliament.

My earliest personal recollections of my aunt were from the early 1950’s when the Micks were living in a large, elegantly furnished apartment in Maida Vale. I would have only been five or six years of age at the time and remember being horrified to learn that I was to sleep overnight on the chaise longue, which I misheard as the “shed long” and imagined it meant I had to sleep in the garden! This difficulty was quickly cleared up when I was shown this long chair. I was to enjoy many such visits to my favourite aunt, firstly as a child to the flat in London, and then later to Ponds Farm in Frittenden in Kent, where Mick invested all her accumulated energy and style in the renovation of a 16th century farmhouse, which became a focal point for the whole family and where Mick loved to entertain.

Shortly before Mike died in 1978, he asked me, as an accountant as well as nephew, to help my aunt deal with all the financial matters that she would be experiencing for the first time, especially those immediately arising from the disposition of his estate. This I gladly undertook, although I soon realised that these new tasks were no more daunting to her than any other challenge in her life. What was obvious, however, was how very much she missed Mike and their rich life together, and without which, understandably, she found it so difficult to come to terms. However, she continued to read and debate the important issues of the day as often as she could, and it was during this last period of her life that I came to spend much more time with her than before, happily fulfilling my understanding of the promise to Mike, and getting to know her better as a person, as distinct from just my aunt.

Three years before she died in 1990, whilst in hospital being treated for pneumonia, she suffered the first of a series of strokes that were to leave her progressively physically incapacitated, and, most poignantly, affecting her eyesight so severely that she was latterly unable to read. I know this loss of sight was the cruellest blow of all and so feel sure that, when she passed away quietly in her sleep in the autumn of 1990, she was ready to leave the stage of life and take her place in the memories of those who come after to fulfil the dreams and aspirations that are their historical and familial legacy.